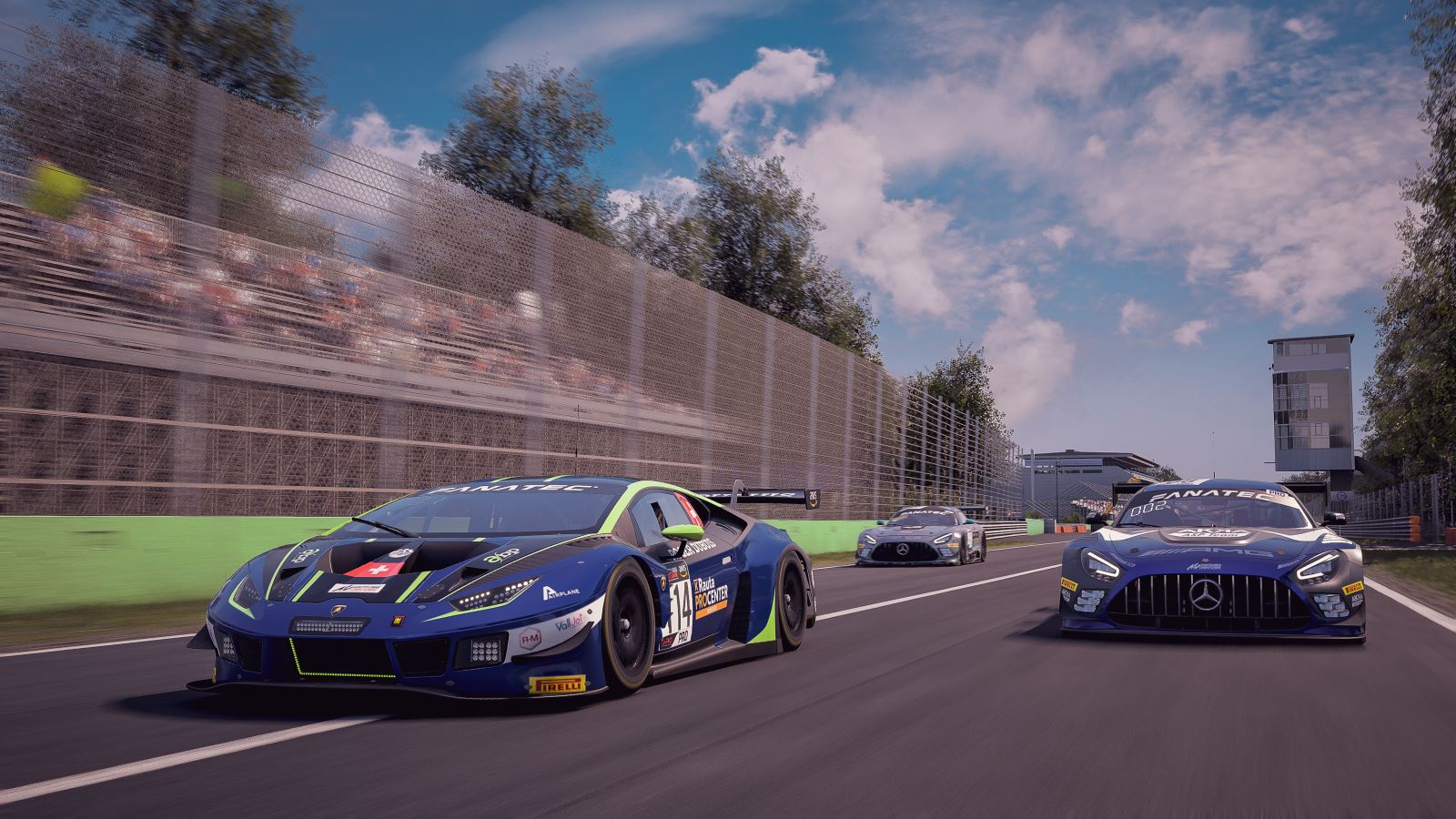 The 2021 GT World Challenge Europe Esports Championship will begin with a bang this week when both the Sprint and Endurance Series tackle their season-opening events at Monza (21/22 May).

The iconic Italian circuit will provide the stage for a one-hour Sprint race featuring single-driver entries on Friday evening, followed by a three-hour Endurance contest for multi-driver teams on Saturday afternoon. As ever competitors will do battle using Assetto Corsa Competizione, the official game of Fanatec GT World Challenge Powered by AWS.

They will test themselves on the sweeping high-speed curves and technical chicanes of Monza, a track that rewards bravery and punishes mistakes in equal measure. The same venue staged last month’s inaugural Fanatec Esports GT Pro Series contest, launching the groundbreaking virtual series in which professional drivers compete for real-world points.

Now the Temple of Speed is set to play host to the very first GT World Challenge Europe Esports events, kicking off a packed season of action for the continental championship.

The Sprint Series opener will begin a sequence of 10 races, each lasting 60 minutes and featuring a mandatory pit stop. The entry list for Friday’s contest was decided by a hot lap qualifying process in which hopefuls were able to try their hand in any of the 11 GT3 models available in Assetto Corsa Competizione, with the fastest four drivers on each manufacturer leaderboard earning their spot.

This fiercely contested battle included many of the continent’s top sim racers. Ferrari esports driver David Tonizza secured his place aboard a 488 GT3 by topping the Italian marque’s rankings, while BMW representative Arthur Kammerer was equally impressive at the wheel of an M6 GT3. There was remarkable parity among the Lamborghini contingent, with just 0.045s separating a top-four led by Polish ace Dominik Blajer, while Aenore Rose and Davide Chiesa posted identical fastest times in the Honda NSX GT3.

One-lap specialist Amir Hosseini guaranteed his involvement by recording the best effort in a McLaren, while the field will be further bolstered by leading sim racers James Baldwin (McLaren) and Nils Naujoks (BMW), who secured their participation by conquering the British GT Esports Championship’s GT3 and GT4 classes.

These names represent just a handful of the 46 drivers who will chase glory in Friday evening’s race. The top-10 finishers will register points towards the Sprint Series standings, while the top-five will have the added incentive of a guaranteed place on the grid for round 2. Live streaming will begin on the SRO YouTube and Twitch channels at 21:00 CEST, with the competitive action set to get underway at 21:10.

While the Sprint Series caters for individual sim racers, Endurance events will see teams of up to four drivers competing for victory. The opening three-hour contest will feature a hugely competitive 34-car grid, with all 11 GT3 marques represented by at least one entry.

There are some serious players involved. FDA Esports Team and Jean Alesi Esports Academy will both chase victory using Ferrari equipment, while BMW will be represented by the leading G2 Esports outfit. Williams Esports will run with an Aston Martin, while HPD JAS Pro Europe will tackle the Monza event with a pair of Honda NSX GT3s.

Barnicoat will not be the only real-world driver competing for Endurance Series victory: British GT racers Michael O’Brien, Angus Fender and the multi-talented James Baldwin also feature on the Monza entry list. They will go up against the best in the sim racing business in a three-hour contest at the Temple of Speed.

Live streaming of Saturday will begin at 17:00 CEST, allowing for 10 minutes of build-up before the race goes green at 17:10. It will be the first of five Endurance Series events staged under the GT World Challenge Europe Esports banner, highlighted by the Total 24 Hours of Spa on 7-8 August.

The European campaign will be the second of three continental GT World Challenge Esports Championships to launch following Thursday’s opening Asian contest (20 May), while the American season kicks off on Saturday (22 May). Each is organised by SRO Motorsports Group in partnership with Fanatec, Kunos Simulazioni, AK Informatica, Pirelli and The Sim Grid.