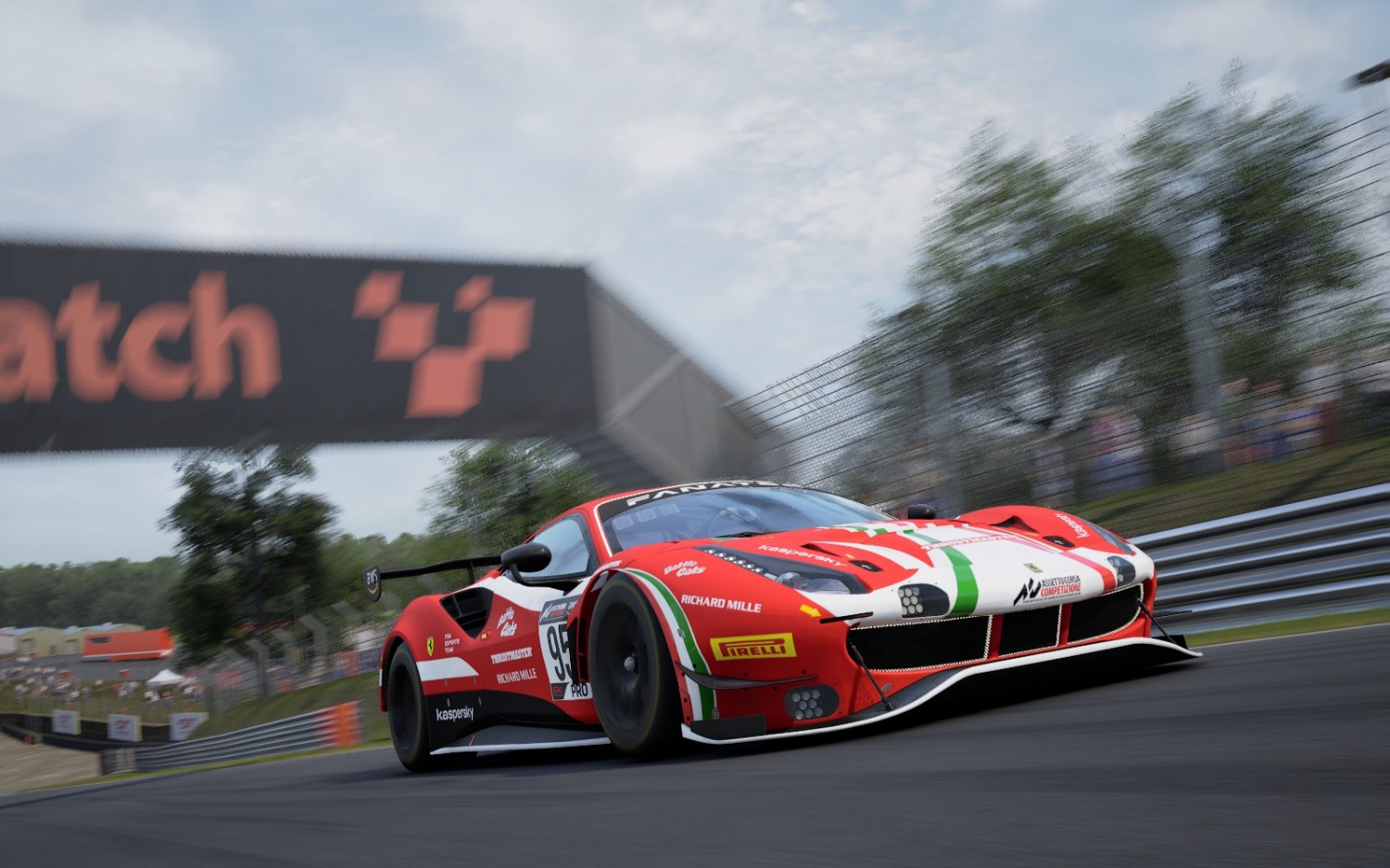 The #95 Ferrari started from pole and, after resisting pressure during the opening 30 minutes, cruised home to triumph by 7.7 seconds. In doing so, the FDA Esports driver opened up a commanding 40-point lead at the top of the championship standings.

Tonizza earned his second pole of the season by edging out Nikodem Wisniewski by just 0.048s in qualifying. The Williams Esports driver impressed last time out with a run to fourth in his Bentley and presented Tonizza with his most significant challenge in today’s Brands Hatch contest.

A huge 43-car grid took the start of the 60-minute Assetto Cora Competizione race, which saw Tonizza lead away from Wisniewski. Behind them, the second FDA Esports Ferrari of Giovanni De Salvo moved up to third after making contact with Mercedes-AMG driver Dáire McCormack, who had qualified an excellent P3 on his debut for the Williams Esports squad.

Wisniewski shadowed Tonizza all the way to the mid-race pit window, getting within a tenth of the Ferrari but not finding space to pass. The Williams Esports Bentley stopped one lap ahead of the FDA Ferrari duo in the hope of making the undercut work, but Wisniewski’s hopes collapsed when he was hit with a 30-second stop-go penalty for speeding on pit lane.

With their chief rival effectively out of contention Tonizza and De Salvo both ducked in to take their mandatory stops and returned to the track running one-two. From this point onwards, Tonizza was unchallenged for the lead.

The most important battle during the second half go the race was for the final spot on the podium. Kevin Siggy (Team Redline McLaren) had exited the pits in third, but he was soon under pressure from fellow 720S pilot James Baldwin (Mclaren Shadow).

The Brit had again qualified lower than expected, lining up 10th, but showed his familiar race pace to charge up the order. He harried Siggy for much of the second stint, but also faced an attack from behind as Jeremy Bouteloup produced his best race of the season in the VDS Coanda Simsport Bentley. Unable to make a risky move, Baldwin had to play the percentages.

By the end this trio had closed up on De Salvo, who lost significant time in the closing laps. But there was to be no change in position, with Tonizza crossing the line a dominant 7.7 seconds clear, followed by teammate De Salvo, Siggy, Baldwin and Bouteloup in close succession. All five drivers have also ensured automatic qualification for the next Sprint Series race at Zandvoort.

McCormack was sixth on debut, though it could have been better still as he lost three positions with an off-track moment during the opening stint. Porsche drivers took seventh and eighth with Maciej Malinowski (Huncfot Racing) ahead of Juri Petritchenko (AJAR Simracing Team), the latter making up nine places from his grid slot. Luca Losio (Jean Alesi Esports Academy McLaren) and Luke Whitehead (SDL eSports By Logitech G Mercedes-AMG) completed the points scorers after both experienced eventful and ultimately frustrating races.

A number of significant drivers were hit with penalties during the the Brands contest. They included Josh Rogers (VRS Coanda Simsport Porsche), who was some way off his usual pace and ultimately took a penalty for avoidable contact with Whitehead. Nils Naujoks was also punished for contact having been judged guilty of tipping Losio off the circuit at Druids.

With 93 points on the board, Tonizza now enjoys a commanding 40-point advantage over Rogers, who failed to score for the first time this season and must quickly return to winning ways if he is to challenge the Italian for the title. De Salvo is third with 49, followed by Siggy on 45 and Baldwin with 40.

The championship will reach its half-way point in two weeks’ time with another 60-minute Assetto Corsa Competizione race at Zandvoort (23 July).